In this topic we will discuss about Potentiometer,its working principle and its applications. Also we will know sensitivity of potentiometer.

Potentiometer – An instrument used to measure accurately the EMF or potential difference is called potentiometer.

Principle– Its working based on the principle that the potential drop across a conductor is directly proportional to the length of the conductor , if constant current passes through the conductor having uniform area of cross-section .

[ calculation of potential gradient ( students don’t have to derive it in case of potentiometer it is useful to solve  the numerical questions) – if Rh = r and resistance of the wire is r and E is the emf of  driver cell  then ,  current through the circuit is , i = E/ (R+r)

All the arrangements are shown in the figure-

Let key K is closed then current i starts flowing through the circuit , if  RAB is the resistance of the wire then , We can write current i = ε/R+RAB ;

Now we close the key K1 also , in that case potential across the R1 is ‘V’ and null point J is at length ‘l’ as shown in figure .

A battery of emf ε is connected between the terminals A and B with variable resistance Rh , Now we have to compare the emf  ε1 and ε2 . We arrange the two cells having emf ε1 and ε2 as shown in figure . At first we connect the terminals 1 and 3 , let at that time J1 is the position where we grt null point , let length of A J1 is l1 so we can write  ε1= Kl1 ……….(i)

Precautions of experiment-  (i) Current through the circuit must be constant .

(ii) the emf of the driving cell (ε) must be greater than emf of the cells whose value has to be compared . 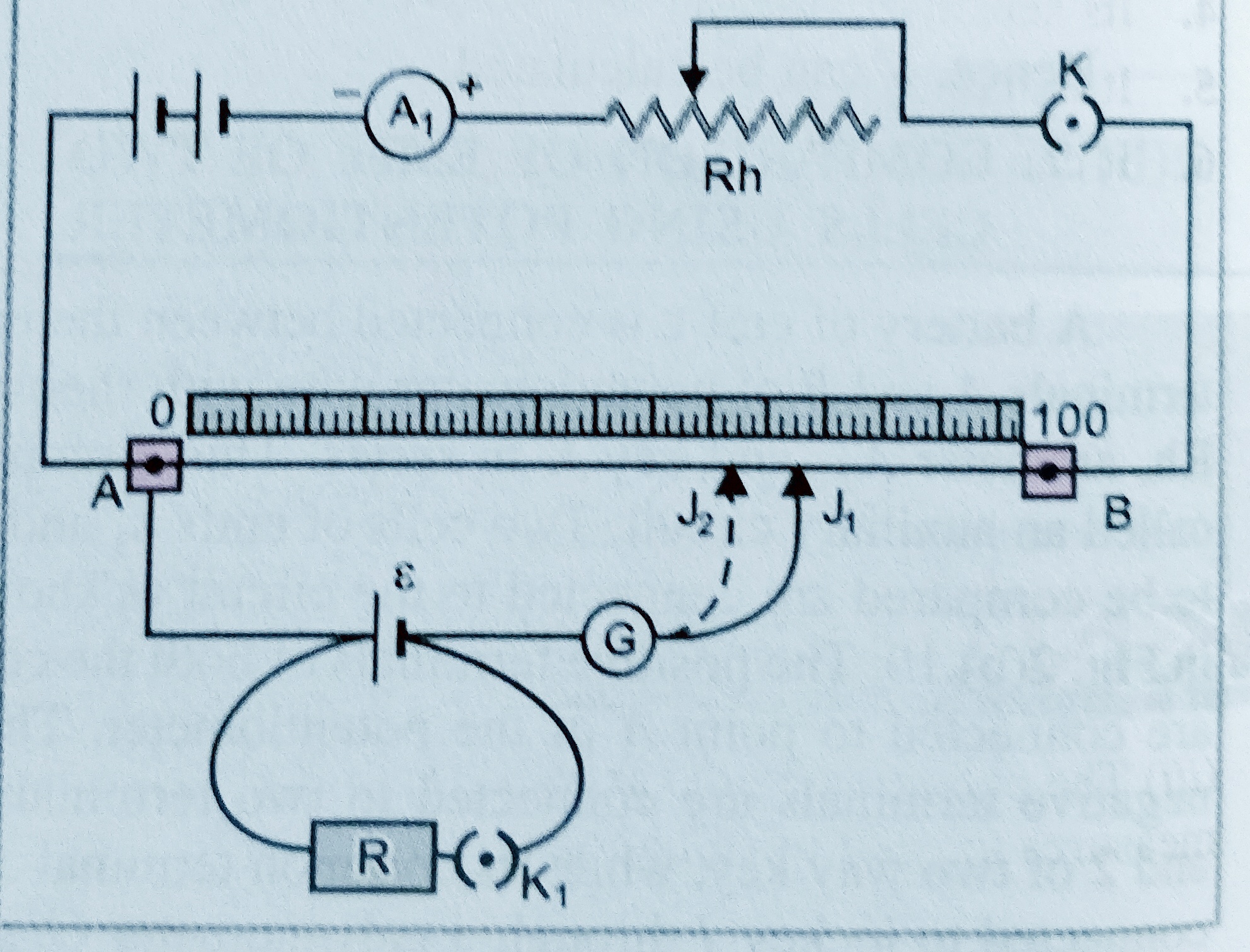 To find the internal resistance r  of the cell  emf ‘ε’ we setup the circuit as shown in figure.

Initially we close the switch ‘K’ and switch K2 is remain open .

Now the switch K1 is closed then the potential across the resistance R is   ‘V’ . And in that case we get the null point at J2 . And AJ2=l2

The sensitiveness of the potentiometer means the smallest potential difference which can be measured with the help of potentiometer .

The sensitiveness of the potentiometer can be increased ;

(i)by increasing the length of the wire of the potentiometer ,

(ii) by decreasing the value of potential gradient using reducing the current by increasing the resistance .

Difference between EMF of a cell and potential difference –

(i)  EMF -It is related with source of current

P.D. – It is related with any two points of the closed circuit.

(ii)  EMF – It cause of potential difference between two point of circuit .

(III)  EMF – It is the amount of work done in taking a unit charge once round the complete circuit .

P.D. – It is the amount of work done to bring unit charge from one point to another point .

(iv)  EMF – It is equal to sum of potential difference across all components of the circuit ( Including all          the cells connected  in the circuit .

P.D. – In a closed circuit the different components of the circuit have different potential difference .

(v)   EMF – It is independent of the external resistance and current drawn from the circuit .

P.D. – It depends on the resistance between two points of circuit and current flowing through it .

I simply want to say I am new to blogging and absolutely loved you’re web-site. Likely I’m likely to bookmark your blog . You definitely have superb articles. Kudos for sharing your web page.

Thanks for every other excellent post. The place else may just anyone get that kind of info in such an ideal manner of writing? Iâ€™ve a presentation subsequent week, and I am at the look for such information.

Hey! Do you know if they make any plugins to help with SEO? I’m trying to get my blog to rank for some targeted keywords but I’m not seeing very good results. If you know of any please share. Appreciate it!

Hey! Would you mind if I share your blog with my myspace group? There’s a lot of people that I think would really enjoy your content. Please let me know. Many thanks

Thanks for the good critique. Me & my cousin were just preparing to do some research about this. We got a book from our local library but I think I’ve learned more from this post. I’m very glad to see such great info being shared freely out there…

where can you purchase valtrex

https://frviagrafrance.com/ – where do i get viagra in pune
viagra vente

Great post. I was checking continuously this blog and I am impressed! Extremely helpful information particularly the last part I care for such info a lot. I was seeking this certain info for a very long time. Thank you and good luck.